Powered by Create your own unique website with customizable templates.
Dialectics Of Space
The following research has been conducted and written by Justin Tyler Tate in the development of Dialectics Of Space.
On page 8 of Henri Lefebvre’s book, The Production Of Space, the author writes:

“We are thus confronted by an indefinite multitude of spaces, each one piled upon, or perhaps contained within, the next; geographical, economic, demographic, sociological, ecological, political, commercial, national, continental, global. Not to mention nature’s (physical) space, the space of (energy) flows and so on.” (Lefebvre)

This description depicts something like a cake or a matryoshka, where layers are built upon each other, upon a foundation of those underneath or inside. There is a natural hierarchy through this production of space which cannot be ignored. Space, as such, is no longer a democratic entity, accessible and free, but rather it becomes another constraint of the structure of society where the elevated tiers of space devalue others. The production of political, commercial and national spaces are built upon the sociological which is built upon the ecological. The weight of upper layers crushes those underfoot. Different kinds of space, however, are not something to be produced nor can they be controlled but they can only be inspired. Spaces are non-hierarchical as they communicate with each other, informing one another in the creation of a unified space-time.
able to merge into one body, we can focus on those methods ​of production which manifest space able to promote a better quality of life. As Henri Lefebvre identified a dominant form of space which sought to overpower, so too did he point towards an alternative form of space which “straddles the breach between science and utopia, reality and ideality, conceived and lived” (Lefebvre) and that is what we are looking for by identifying nexus points where architectural, pedagogical, experimental, environmental, playful, dialogical and laborious spaces can converge.
​

Figure 01: Playground Components by Aldo Van Ecyk, 1947 - 1978
​In developing a trajectory for the concentration of such spaces, we will begin right before the midpoint of the 20th century, in 1947, when Aldo Van Eyck designed the first, out of hundreds, of his playgrounds which were installed in Amsterdam (Oudenampsen). Through his work, Van Eyck grew play spaces out of urban space using minimal, multi-purpose, modular structures which are simultaneously sculpture, toy and architecture. The simplicity of such structures and their materiality engaged with the materials of modern cities and labor, predominantly steel and cement, while accessing children’s imagination to use a static play space in a myriad of ways. Because of Van Eyck’s playgrounds, urbanity was infected by play as he appropriated existing sites around Amsterdam.
​
​A peer of Van Eyck, Constant Nieuwenhuys also looked to play as an integral part of urbanity but rather than attempting to infect the city with play, he instead tried to imagine a kind of city, a New Babylon for Huzinga’s Homo Ludens to inhabit. In a text that Nieuwenhuys wrote for a Haags Gemeetenmuseum exhibition catalog published in 1974, he states:

"As a way of life Homo Ludens will demand, firstly, that he responds to his need for playing, for adventure, for mobility, as well as all the conditions that facilitate the free creation of his own life." (Nieuwenhuys)

The city Constant Nieuwenhuys envisioned was a futuristic expression of architecture that presented a blank experimental space for potential inhabitants who would be incorporated into its body as participants. New Babylon was a modular proposition which could be modified, customized and played with, according to the needs of the population. The proposed architecture would become an event as it changed over time and use, conforming to the needs of social space. New Babylon would have been a kind of living body, working symbiotically with the smaller organisms (humans) living within it. The work speculates on a society where all non-creative labor has been automatized, providing ultimate freedom to play, explore, learn and create. Nieuwenhuys designed an architectural ideal, utopian and free. The very conceptualizing of New Babylon is play according to Huizinga’s five characteristics of play, especially because it is so far from “ordinary” or “real” life while attempting to become the alternative form of space talked about by Henri Lefebvre.
​ 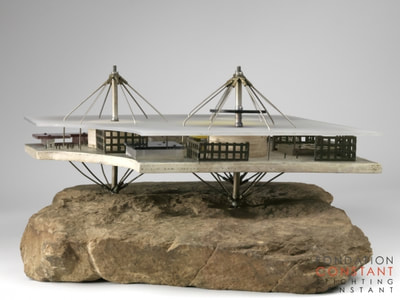 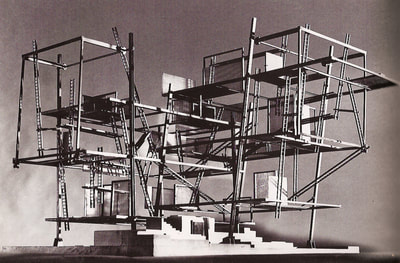 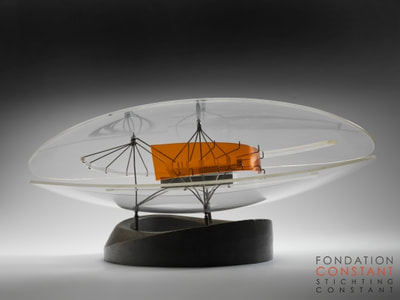 ​Unfortunately, New Babylon was never realized but some quarter of a century later, it started to become generally apparent that the future would need something more than what Nieuwenhuys was proposing. Millennium Hut (1998), a project by artist Claire Barclay who collaborated with the architectural firm Studio KAP and was commissioned by the Govanhill Housing Association in Glasgow, Scotland, was a response to the looming future of energy resources and global overpopulation. Perhaps coincidentally, Millennium Hut’s construction coincides with the beginning of the Tiny House Movement (Wikipedia). Barclay’s project was constructed out of a combination of new and recycled materials, occupied a footprint of just 2 square meters of space and had solar panels on its roof. The project was supposed to be a community facility that functioned in a number of different ways: as a garden store, workshop, library, viewing platform and also included shelves for growing plants on (Thompson).
​If we traverse space-time a bit, from Barclay’s Millennium Hut, journeying one year previous and all the way to northern Thailand, where we arrive at a project called The Land (1998) by the collective which goes by the name, The Land Foundation. The project started as a way to reclaim the land as in recent years frequent flooding had caused rice farming in the region to become unproductive and local farmers have offered their lands for other development as they searched for better prospects (The Land Foundation). As The Land was cultivated through agricultural experimenting, so too were artists and architects invited to develop its infrastructure of buildings and alternative sources of energy. Assuming the methodology of an artist in residence program, the project hosts international artists who then work with locals to develop art/architecture as components to be incorporated into the natural surroundings.
​​

Figure 07: The Land by Land Foundation, 1998
​Through cultivation, collaboration and community development, The Land is enveloped within a social space where experimentation is encouraged for the purpose of developing sustainable methods for land use. The project is a holistic, non-for-profit approach to land development and is currently continuing their activities with two “huge” construction projects (theland@thelandfoundation.org). The Land is a permanent project which obscures the definitions of art, activism, architecture, agriculture and economy.
​
The next project we will look at was partially developed at The Land. SUPERFLEX, a collaborative art group out of Denmark “challenges the role of the artist in contemporary society and explores the nature of globalization and systems of power” (SUPERFLEX). The work that they implemented in a number of different locations including at The Land, titled SUPERGAS (1996-2010), is a simple biogas production system which is able to create enough gas to satisfy the cooking and electricity needs of a family (Thompson).
​
“Architecture produces living bodies, each with its own distinctive traits. The animating principle of such a body, its presence, is neither visible nor legible as such, nor is it the object of any discourse, for it reproduces itself within those who use the space in question, within their lived experience.” (Lefebvre).

Thomas Hirschhorn, is an outsider in every sense to the community where his project, The Gramsci Monument (2013), was situated. During the summer of 2013, the courtyard of Forest Houses (Bronx, New York, USA) was transformed into bustling center for community engagement, socializing, debate and learning. Hirschhorn has received a lot of criticism because of his own ethnicity and cultural background as a white, well-to-do European who produced this work in a public housing estate with a primarily Black and Hispanic, lower-income population as “colonialism” and “exploitative”. The artist brought the money, he created the concept and provided the context (Kester) but the community of Forest Houses owned the experience. In a writing published in the Dia (the organization who commissioned The Gramsci Monument) catalog, Lex Brown, who was running the children’s workshop for 11 weeks without a day off, wrote: ​
​Though the project lasted only for a summer, it ripples across space-time as the project lasts in the minds of local residents who, primarily, look upon it as having a positive impact on the community (Kimball). The project actually has the reverse effect of colonialism as the community took ownership of it, whereas art-tourists coming from the more affluent and primarily white parts of New York City could feel their otherness and discomfort because of it as they entered the space surrounding The Gramsci Monument (Brown). Through that ownership of the space, the community was not a recipient of social welfare but were able to collectively activate their own alternate reality that was merely catalyzed by the artist.
​
The handful of projects we have explored over the seven decades between the middle of the 20th century until the teens of the 21st century draws a visible trajectory for the exploration of alternative methods of spatial production that is reactionary to the dominant, dominating space of wealth and power (Lefebvre). In one way or another, these projects have demonstrated the potential of architecture, labor, experimentation, pedagogy, play, environment and social spaces as working together, often times as seamless convergences. These projects desire for creating places which impart transformative effects upon their participants (real or potential) as well as the space-time in which they inhabit. Such projects become, only through the process of performance that participants bring to them (Kester). Though the care that is imbued into materials and designs in all of these examples, spaces are manifested that debate and discuss with one another. At the singularity where these spaces we’ve been proposing coalesce, in a nexus of swirling ideas where space-time collapses in on itself, is the truth and the totality in the dialectics of space. It is a Hegelian dialectic, not a Platonic one (Maybee). In identifying and exploring the relationships between these different spaces, in as much as they exist or do not in each of the works we have reviewed, their boundaries have become malleable. The frequency of such places and projects, where these nexuses happen are increasing but they are not utopos (a good place) but rather they are outopos (no place). They exist as windows into another reality, they are ephemeral, always occurring and always shape shifting. The truth in possible utopias is that they are impossible to permanently maintain in a finite world. The nexuses we have been looking for are that which come into being like bubbles from a wand; emerging from reality that comes into existence only to disappear, just as quickly, leaving ripples in the fabric of space-time. Nexuses where architecture, pedagogy, experimentation, environment, play, labor as well as social space are able to coalesce into one.
​
Dialectics of Space, as a project, looks to extend, experiment with and explore this history by way of purposefully creating modular installations using waste materials within different types of venue. Through trial and error, the project is able to develop a methodology in creating ephemeral nexus points where the types of spaces we have been talking about coalesce and produce alternate realities, where the typical values of daily life no longer function as such. The fabricated space is able to envelop participants in a functional, though perhaps unusual, space where different elements work symbiotically and without hierarchy. Individuals are actively integrated into its body as participants, as they are encouraged to cooperate with others while the space itself imbues itself into them.

Powered by Create your own unique website with customizable templates.